The series (so far ) contains:

Islamic History can be divided into 4 distinct periods:

But before we delve into the Islamic History, lets just cast a glance over Arabia as it was before Islam came to it. A quick look at the map of Arabia might be helpful. 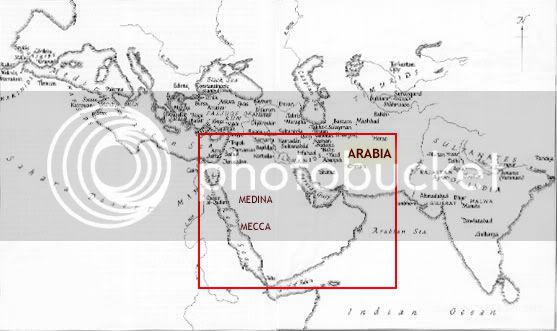 Take yourself back in time – around 15 centuries back. The people who lived in Arabia at that time were mainly the Bedouins — These people were tough, warlike, hostile and unorganised. Characterised by their pagan fury (al-hamiyat al jahilliyyah), they oft broke into wars over trivial issues that extended over years. For example, the Battle of Basus that extended over a period of 40 years, was started over a she-camel. They had no political unity, and were divided into innumerable tribes.

While speaking of these people, it would be unjust to not talk of the good qualities that were part of the way the lived. These people were extremely hospitable, excellent in poetry, and courageous.(Talking of their poetry skills, poetry competitions were held whereby the winners names used to be written on silk and were hung in the Kaaba. These are known as Muallaqaat.)

Religious belief system:
The arabs were idol worshippers except for some Jews and Christians. Their belief system can be generally classified under polytheism, fetishism, and animalism. They diefied Al-Lat (the sun goddess), Al-Uzza(most high, originally personified planet Venus), Al-Mannat (goddess of fate and death), Wadd (god of love) etc. The most revered amongst their dieties was Hubal. The idols of more than 360 gods and goddesses were placed in the sanctuary.
The Jews were mainly in Yathrib, Fadak, Khaybar adn Wadi-al-Qura. These people were mainly the agriculturists, craftsmen and goldsmiths.
The Christian community consisted of the Ghassanids of Syria, Lakhmids of Hira and as some desert tribes like Kalb, Tanukh, Taghlib.
Besides these there were individuals whose monotheistic beliefs couldnot be identified as Christian or Jewish; these were the Hanifs.

Society:
Arrogance, injustice, vice and superstition were the norms. Women were treated not better than commodities and had no rights. Female infanticide was common. Unrestricted polygamy and concubinage was the norm. Slaves were treated in a savage manner.
Social inequality, exploitation, injustice, persecution, drinking, gambling, looting, plundering were rampant.
(Note: Does this ring a bell.. isnt our society pretty much the same?)