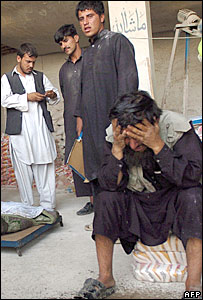 I find the idea of enduring freedom very confusing. Freedom isn’t anything that we ‘endure’ or bear with… it is supposed to be the one thing that we all wish for.

But then.. to think of it.. one would have to endure ‘freedom’ if the freedom is not your’s .. but someone else’s and .. it somehow infringes upon your rights.

Well maybe that’s what Operation Endure Freedom is all about. The Afghans bearing with American freedom to do just about anything….

The US-led coalition – under the banner of Operation Enduring Freedom – is a counter-terrorism mission that involves mainly special forces.[bbc]