They say ‘action speaks louder than words’. So obviously love entails that both the partners put an extra effort to make life easier for the other person. Our beloved Prophet said: The best of people is the one who is beneficial and helpful to his wife and his housemembers”. We know from narrations of his lifestyle that the Prophet (saw) always busied himself in housework whenever he was home. Even though he was truly the king of kings, there was no ego that got in his way to extend help to his family.

‘Ä€’ishah said about her husband: “When he was at home, he was totally involved in housework.”

Where love was not to be found:

“Live with them on a footing of kindness and equity. If ye take a dislike to them it may be that ye dislike a thing, and Allah brings about through it a great deal of good.” (An-Nisa’: 19)

And not just that once when Abu Bakr (ra) almost hit his daughter for being harsh to the Prophet, Aisha (ra) hid behind her huband and the Prophet (saw) asked Abu Bakr(ra) to not treat her harshly.

Umar (ra) has been known for his fiery nature. The way he would bear his wife’s shouting and revilingby recounting all the good that she does for him is truly amazing indeed.

Once Abu Bakr, his father-in-law, was invited to settle some misunderstanding between him and Aishah. The Prophet said to her, “Will you speak, or shall I speak?” Aisha said, “You speak, but do not say except the truth.” Abu Bakr was so outraged that he immediately struck her severely, forcing her to run and seek protection behind the back of the Prophet. Abu Bakr said, “O you the enemy of herself! Does the Messenger of Allah say but the truth?” The Prophet said, “O Abu Bakr, we did not invite you for this [harsh dealing with Aishah], nor did we anticipate it.” quoted in: Mutual Rights and Obligations

One of his wives woke up in the middle of the night and discovered that the Prophet ( r) was not beside her, though it was her night to have him with her. She tells us that she locked the door on him, thinking that he had gone to one of his other wives on her night. When he returned after a short while to find that she had locked him out of the house and asked her to open the door, she confronting him on why he had gone out. He calmly told her that he simply had needed to go to the bathroom.

‘Umar ibn al-Khattab (RA) said that a man came to his house to complain about his wife. On reaching the door of his house, he hears ‘Umar’s wife shouting at him and reviling him. Seeing this, he was about to go back, thinking that ‘Umar himself was in the same position and, therefore, could hardly suggest any solution for his problem. ‘Umar (RA) saw the man turn back, so he called him and enquired about the purpose of his visit. He said that he had come with a complaint against his wife, but turned back on seeing
the Caliph in the same position. ‘Umar (RA) told him that he tolerated the excesses of his wife for she had certain rights against him. He said, “Is it not true that she prepares food for me, washes clothes for me and suckles my children, thus saving me the expense of employing a cook, a washerman and a nurse, though she is not legally obliged in any way to do any of these things? Besides, I enjoy peace of mind because of her and am kept away from indecent acts on account of her. I therefore tolerate all her excesses on account of these benefits. It is right that you should also adopt the same attitude.” quoted in Rahman, Role of Muslim Women page 149

The bond of love between husband and wife has to be so strong that even death doesn’t lessen the love felt for the loved one. In Islam we believe that those who believe and do righteousness will be joined by their spouses and offspring in the life hereafter.The Prophet’s (saw) love for Khadija (ra) his wife of 25 years, extended to include all those she loved and continued even after her death. It was many years after her death and he never forgot her and whenever a goat was slaughtered in his house he would send parts of it to Khadija’s friends and whenever he felt that the visitor on the door might be Khadija’s sister Hala, he would pray saying “O Allah let it be Hala.”

Ofcourse marriage is only with consent

For romance to be part of marriage and for marriage to truly fulfill its purpose, it is essential that marital bond itself is based on consent and is not forced. There are numerous ahadith that go to establish the fact that the marital contract should be made only by consent from both parties.

Quoted by Imam Bukhari from al-Khansa’ bint Khidam: “My father married me to his nephew, and I did not like this match, so I complained to Allah’s Messenger (sallallahu ‘alayhi wa sallam). He said to me: ‘Accept what your father has arranged.’ I said, ‘I do not wish to accept what my father has arranged.’ He said, ‘Then this marriage is invalid, go and marry whomever you wish.’ I said, ‘I have accepted what my father has arranged, but I wanted women to know that fathers have no right in their daughter’s matters (i.e. they have no right to force a marriage on them).’” See Fath al-Bari, 9/194, Kitab al-nikah, bab ikrah al-bint ‘ala al-zawaj; Ibn Majah, 1/602, Kitab al-nikah, bab man zawwaja ibnatahu wa hiya karihah; al-Mabsut 5/2.

This is confirmed by the report in which the wife of Thabit ibn Qays ibn Shammas, Jamilah the sister of ‘Abdullah ibn Ubayy, came to the Prophet (sallallahu ‘alayhi wa sallam) and said: “O Messenger of Allah, I have nothing against Thabit ibn Qays as regards his religion or his behavior, but I hate to commit any act of kufr when I am a Muslim. The Prophet (sallallahu ‘alayhi wa sallam) said: “Will you give his garden back to him?” – her mahr had been a garden. She said, “Yes.” So Allah’s Messenger sent word to him: “Take back your garden, and give her one pronouncement of divorce.” Fath al-Bari, 9/395, Kitab al-talaq, bab al-khul’.

According to a report given by Bukhari from Ibn ‘Abbas, she said, “I do not blame Thabit for anything with regard to his religion or his behavior, but I do not like him.”

Ibn ‘Abbas said: “Barirah’s husband was a slave, who was known as Mughith. I can almost see him, running after her and crying, with tears running down onto his beard. The Prophet (sallallahu ‘alayhi wa sallam) said to ‘Abbas, ‘O ‘Abbas, do you not find it strange, how much Mugith loves Barirah, and how much Barirah hates Mughith?’ The Prophet (sallallahu ‘alayhi wa sallam) said (to Barirah), ‘Why do you not go back to him?’ She said, ‘O Messenger of Allah, are you commanding me to do so?’ He said, ‘I am merely trying to intervene on his behalf.’ She said, ‘I have no need of him.’” 4

There is a lot more that we can learn from the Prophet’s life and the Quranic injunctions on how the relationship between husband and wife should be maintained.However, I would end this article with the words from the Quran that sum up the crux of what marriage us supposed to be:

“And among His Signs is this, that He created for you mates from among yourselves, that ye may dwell in tranquility with them, and He has put love and mercy between your (hearts): verily in that are Signs for those who reflect.” (Ar-Rum: 21)

May Allah guide us, and help us all live in tranquility with our loved ones. Ameen. 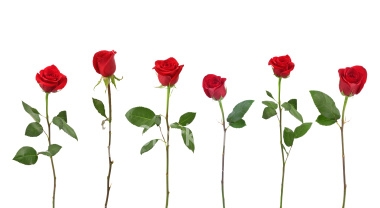 15 thoughts on “Romance in Islam”