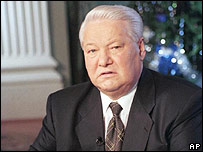 Finally.(If I may be allowed to add.)

I read the news. And I go back a few years in time and remember my literature class…

The evil that men do lives after them;
The good is oft interred with their bones;
So let it be with Caesar. (Shakespeare, Julius Caesar)

And I remember the death of the man painted as the demon – no other than Saddam Hussein.

Both tyrants.
Both dead.

Yet one remembered as a “Giant of History” and the other as “demon”. The irony of it all.

Strange and sickening, but unfortunately this is how the world we live in works.
Yeltsin died – of old age, of being drunk, of whatever reasons. The country laments his death. They mourn and give him a respectful burial. The priests pray for him. And he is remembered as a giant of history.

I wont display graphic images of the brutalized Chechens … but something to serve as a reminder:

I will always associate Boris Yeltsin with my grimmest ever job as a journalist too. In the spring of 1995, I stood in a field in Chechnya. Lines of civilian corpses, some charred by flames, lay awaiting burial. This was the result of the Kremlin’s heavy-handed response to the breakaway region’s bid for independence. (JAMES RODGERS, BBC’s Moscow correspondent for periods 1991-2007)

You decide whether you wish to mourn or rejoice.